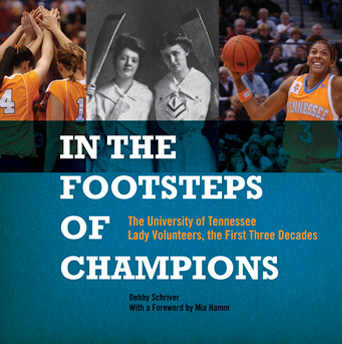 In the Footsteps of Champions

Available for purchase at Amazon.com | Published by University of Tennessee Press

“In The Footsteps of Champions is an inspiring and incredibly well researched documentation of the role that the women and men of the University of Tennessee had in the evolution of women’s athletics. The individual profiles create a compelling format. The interviews with the individuals who were directly responsible for the tremendous growth of the program provide a fascinating first person perspective. This is a must read for those who are interested in intercollegiate athletics.”

“This book captures the unique history of the Lady Vols, a preeminent program in the nation. Under-reported in general media, Schriver does a wonderful job lacing together the genesis and proliferation of Tennessee’s legendary Lady Vols programs, especially the unsurpassed basketball program of Pat Summit. The photographs add the third dimension of visual experience that helps Volunteer fans new and old wrap their arms around an amazing story. Enjoy the book and the story.”

“In In The Footsteps of Champions, the reader truly experiences the life of women’s intercollegiate athletics. The author, Debby Shriver, defines the role of sport in education and life skills. I am now an avid Lady Vols fan!!! Also a wonderful coffee table book!!”

ABOUT IN THE FOOTSTEPS OF CHAMPIONS

In the Footsteps of Champions: The University of Tennessee Lady Volunteers, the First Three Decades invites readers to experience the journey of women’s intercollegiate athletics from the beginning to the present day. While the record-setting basketball dynasty of Coach Pat Summitt with the regional and national successes of ten other sports teams create fascinating stories in themselves, the saga of the Lady Volunteers actually begins as early as 1893, when the first women enrolled as students at the University of Tennessee.

This book captures the enthusiasm, determination, and vision of those who created the foundations for this leading women’s athletic program. Student-athletes, coaches, fans, faculty, and staff share their memories of the years prior to Title IX legislation, the first years of the program’s development as a free-standing department and the strong presence that the Lady Volunteers program has today. Special features include first-person stories by coaches and student-athletes from the era preceding 1976 and the three following decades. Unique views from behind the scenes, plus the largest collection of photographs featuring women’s intercollegiate athletics ever published will draw the interest of the historian, sports enthusiast, and follower of women’s athletics. Readers will trace the journeys of their favorite Lady Volunteers from childhood through college and to the successful lives they lead today. The perspectives of these student-athletes provide insight on the role of sports in education and human development. In the Footsteps of Champions is fun to read, inspiring, and appealing to anyone who enjoys sports.

Now retired from the University of Tennessee, Knoxville, Debby Schriver was the first woman to be elected president of the National Orientation Directors Association. She is the author of In the Footsteps of Champions: The University of Tennessee Lady Volunteers, the First Three Decades and is currently at work on her next book, Whispering in the Daylight: The Children of Tony Alamo’s Christian Ministry and Their Journey to Freedom.

Purchase In the Footsteps of Champions on Amazon.com